For schools and other education institutions: the simulation game about tobacco trading

What is a simulation game?

It is a role play, in which players adapt the roles of real parties. This approach leads to an easy understanding of political and economic relations and the interests of different stakeholders in the tobacco trade.

What is the simulation game Tobacco in Bralawia about?

In the imaginary country Bralawia, a dispute broke out about the ratification of the Tobacco Control Traety of the World Health Organization. The government is worried about the export revenues, the trade association is sceptical, the NGO „Environment and Social Justice“ has already been promoting alternatives to tobacco cultivation for a long time. The players can put themselves into one of these roles and discuss, negotiate, take action and intrigue. At the end of the game, discussions are brought back to reality: Which options are there to break the system of exploitation and its structures? How could we contribute to it?

Who could play this game and how much time is needed?

The game is suitable for students in secondary school, students infoundation courses as well as for adults in education on sustainable development.

Including an introduction to the topic, the games takes at least four hours to play, but time can be partitioned in two days.

What’s in the simulation game Tobacco in Bralawia?

The game is ready to play and contains:

Since December 2018 the simulation game also contains a variation focusing on the environment.

This additional material enhances the environmental issues of tobacco and supports teachers to link this simualtion game to topics like climate change, deforestation, soil degradation and biodiversity. It includes new role discriptions for the non governmental organisation, a newspaper clip with an interview as well as an additional event card. 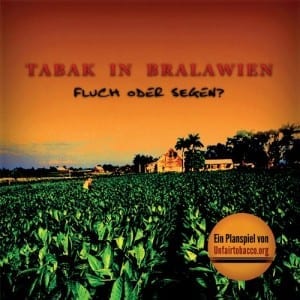 No VAT required for small enterprises according to German law, §19(1) UStG. plus shipping costs