A child labourer in Indonesia bundles green tobacco leaves to prepare them for curing. © 201605HRW_Indonesia_Tobacco_photo3_325 by Human Rights Watch / All Rights Reserved

Support our work for Children's Rights

Your contribution to a tobacco-free future

PRESS RELEASE on the occasion of World No Tobacco Day 2020

Alliance of 19 civil society organisations working on public health, sustainable development and children‘s rights turns to UN Committee on the Rights of the Child and criticizes the consequences of deficient tobacco control.

Berlin, 26.5.2020 – By the UN Convention on the Rights of the Child, Germany is obliged to strengthen children‘s rights and to regularly report to the UN about its efforts. Simlutaneously, Germany has to implement the WHO Framework Convention on Tobacco Control and to align its tobacco control measures to grant the right to health for everyone.

On the occasion of World No Tobacco Day on 31 May 2020, the German Cancer Research Center, the German Children‘s Fund (Deutsches Kinderhilfswerk), Unfairtobacco and 16 other organisations submit an alternative report to the UN Committee on the Rights of the Child. They criticize the deficient protection of children from secondhand smoke, from tobacco advertisement and from exploitation, i.e. child labour. They demand the German government to immediately take stronger tobacco control measures in order to better protect children‘s rights.

Sonja von Eichborn, Director of Unfairtobacco, declares: “Due to its deficient tobacco control policies, Germany is violating the fundamental rights of children to health and life. In addition, children’s rights must be protected along the entire supply chain, because cigarette companies profit from child labour and exploitation. It is long overdue that the Federal Government fulfils its obligations under international law and puts the tobacco industry in its place”.

Ute Mons, Head of the Cancer Prevention Unit of the German Cancer Research Center, substantiates the demands: “Among European countries, Germany is at the bottom of the tobacco control scale. Notably, advertising bans on tobacco products have been delayed for years, although they could protect young people in particular from taking up smoking. But while the Federal Government remains inactive, the tobacco industry continues to attract many young consumers. Therefore, effective tobacco advertising bans such as the outdoor advertising ban must be implemented urgently”.

Nina Ohlmeier, Head of the Political Communication Department at the German Children’s Fund, adds: “The UN Convention on the Rights of the Child grants children the right to the highest attainable standard of health. It is the state‘s duty to fulfill this right. When it comes to secondhand smoke, Germany is far from doing so. Beyond appeals, we need first and foremost a ban on smoking in playgrounds, around schools and in cars where the concentration of toxic particles is particularly high. In public places, adults are also important role models for children”.

The alternative report was prepared by the Network Children‘s Rights and Tobacco Control which was founded in September 2018 and is coordinated by Unfairtobacco. The network aims to achieve a tobacco-free world by 2040. More than 20 organizations and experts working on tobacco control, public health, children‘s rights and sustainable development are members of the alliance. They work ad hoc and in changing constellations on common campaigning activities, events and publications.

Link to the submission to the UN Committee
unfairtobacco.org/wp-content/uploads/2020/05/Parallel-report_UN-CRC_Germany_2020.pdf

"Due to its deficient tobacco control policies, Germany is violating the fundamental rights of children to health and life." Sonja von Eichborn, Unfairtobacco

Alternative Report to the UN CRC 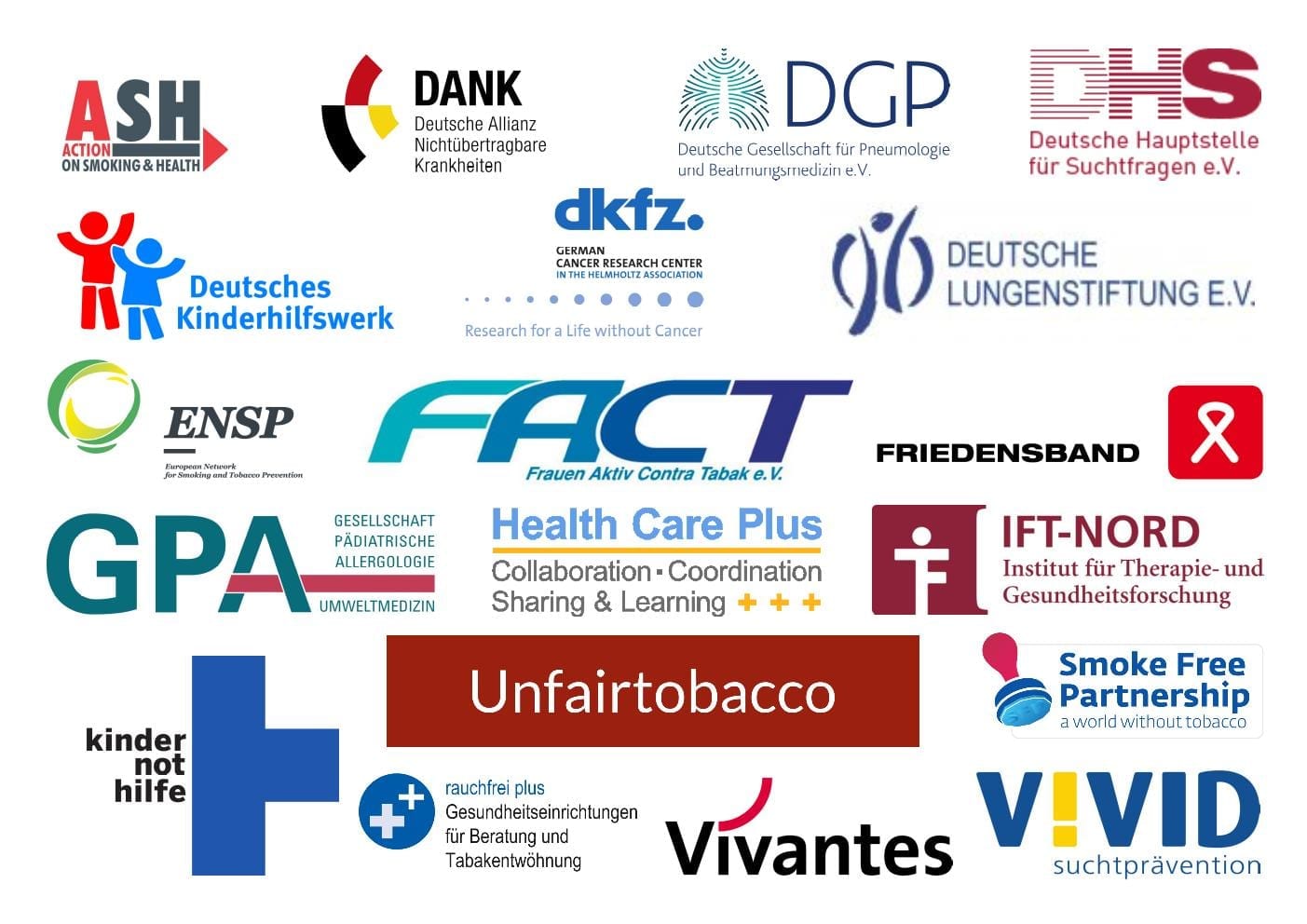 Supporting organisations of the alternative report "Children's Rights and Tobacco Control in Germany" to the UN Committee on the Rights of the Child © UN-KRK_Mitzeichner-Logos by Unfairtobacco / CC BY-NC-ND 4.0

Children have a right to a tobacco-free world

At ECToH 2020, an alliance of 20 organisations publishes a brochure on children's rights and demands governments to strengthen tobacco control.

British human rights lawyers bring a case against BAT and say that the corporation is responsible for child labour in its supply chain.

Children's rights are violated in tobacco growing as well as by smoking. Read here about thew rights children have and how to create a tobacco-free world.

Factsheet Children have a Right to a Tobacco-free World

This factsheet shows which children's rights are violated by smoking and tobacco cultivation.

This analysis discusses how the private sector - and particularly the tobacco industry - is involved in the implementation of the Sustainable Development Goals (SDGs).