After completing a collaboration with Philip Morris International (PMI) to develop a “human rights implementation plan,” the Danish Institute for Human Rights (DIHR) concluded that immediately stopping the sale and marketing of tobacco is the only way for tobacco companies to uphold basic human rights.

ASH and Unfairtobacco are fully aligned with the DIHR conclusion that tobacco production and marketing is deeply harmful and irreconcilable with the human right to health, meaning that PMI and other tobacco companies must stop selling harmful products immediately.

Tobacco giant Philip Morris International (PMI) approached the Danish Institute for Human Rights (DIHR), a quasi-state body, last year to collaborate on a “human rights implementation plan” for PMI. The DIHR was given access to the corporation to assess PMI’s value chain. Following DIHR’s completion of their work, they concluded:

Allan Lerberg Jørgensen, Department Director, Human Rights and Development with the DIHR, stated they hoped their “input will enable PMI to better understand how the corporate responsibility to respect human rights applies to their business and take the necessary action.”

“ASH and our allies strongly agree with DIHR that the sale of cigarettes is irreconcilable with human rights. The necessary action that DIHR references is clear: if PMI is serious about human rights, it should stop producing, marketing and selling products that kill their consumers.”
– Laurent Huber, Action on Smoking and Health (USA)

“As early as 1954, then PMI Vice President George Weissman said that ‘If we had any thought or knowledge that in any way we were selling a product harmful to consumers, we would stop business tomorrow’. The DIHR assessment is just the most recent reminder of their promise. We expect PMI to finally stop selling cigarettes immediately.”
– Laura Graen, Unfairtobacco

For PMI to continue producing and marketing cigarettes directly conflicts with development and human rights objectives. Tobacco corporations not only sell a defective product that kills half of its consumers, but they also have a long history of pressuring governments to block and delay lifesaving regulations, thus costing the world millions of lives and billions of dollars every year.

One strategy the tobacco industry utilizes is the use of third party collaborations to interfere with tobacco control policy making, or to gain legitimacy as a “stakeholder,” and to white wash their reputation.

For this reason, the global tobacco treaty, the World Health Organization Framework Convention on Tobacco Control (WHO FCTC) includes a process designed to protect public health policies from the interests of the tobacco industry, requiring that all public or semi-public institutions “should interact with the tobacco industry only when and to the extent strictly necessary to enable them to effectively regulate the tobacco industry and tobacco products.” With that in mind, the global public health community was united in asking DIHR to break their PMI relationship, in line with the Institute’s international human rights obligations. The DIHR responded promptly, ending the relationship before its originally published end date (August 2017).

Stopping the sale of tobacco products is also consistent with the United Nations Sustainable Development Goals (SDGs), which call on countries to reduce the number of smokers through implementation of the tobacco treaty, the WHO FCTC.

Philip Morris has publicly welcomed the adoption of the Sustainable Development Goals, while their products are simultaneously recognized by the United Nations, Human Rights agencies, and the public health community as a barrier to development and human rights. Philip Morris states on its website, “How long will the world’s leading cigarette company be in the cigarette business?” The answer is clear: not a day longer.

UNFAIRTOBACCO
Founded in 2004, Unfairtobacco advances tobacco control issues in the arena of development politics and vice-versa. The project exposes how tobacco industry harms farmers, consumers and the environment. unfairtobacco.org

ACTION ON SMOKING AND HEALTH
Founded in 1967, Action on Smoking and Health (ASH) is America’s oldest anti-tobacco organization, dedicated to a world with ZERO tobacco deaths. Because tobacco is the leading cause of preventable death worldwide, ASH supports bold solutions proportionate to the magnitude of the problem. www.ash.org 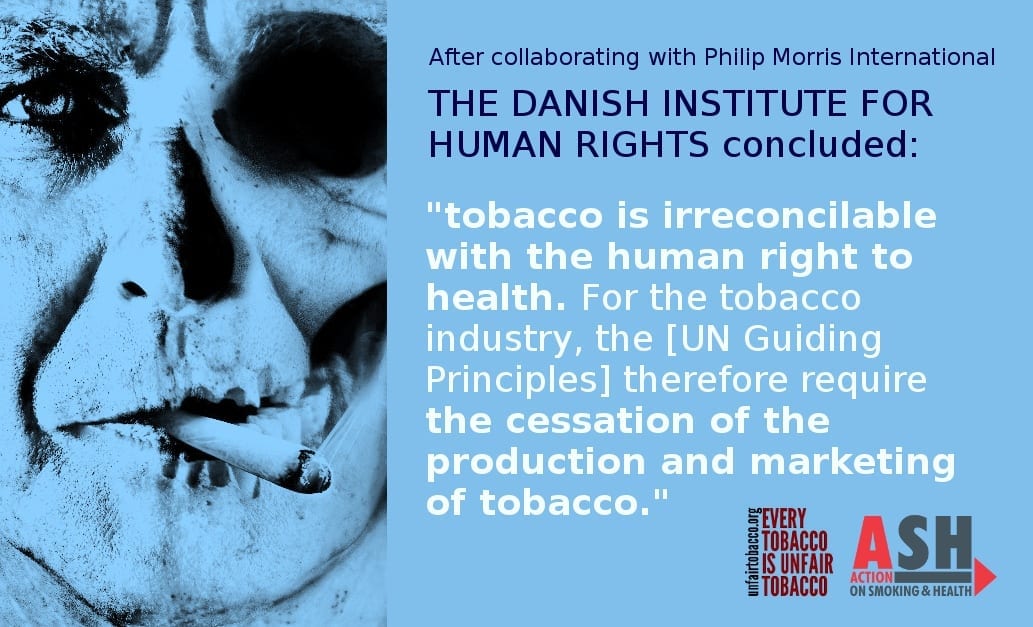 We urge the Danish Institute for Human Rights to quit its collaboration with PMI.

This factsheet shows how tobacco control and Development Goal 17 fit together.