Today, 89 organizations from around the globe published an open letter to Philip Morris International (PMI) demanding that they immediately cease the production, marketing and sale of cigarettes. The move was prompted by a similar recommendation from the Danish Institute for Human Rights, which had been hired by PMI to perform a human rights evaluation.

PMI owns and markets some of the world’s most popular brands of cigarettes including Marlboro. Tobacco use is the world’s leading cause of preventable death, taking over 7 million lives a year. If current trends continue, tobacco will kill one billion people this century, according to the World Health Organization.

“Tobacco companies have known for more than half a century that cigarettes cause death when used as intended, and yet they still produce and market them aggressively.” said Laurent Huber, Executive Director of Action on Smoking and Health. “They could have removed these deadly products from their portfolio, but instead there is plenty of evidence that they have labored to engineer cigarettes to be as addictive as possible. This is unconscionable, and PMI has admitted as much in the past.”

In May the Danish Institute for Human Rights (DIHR), after conducting a human rights evaluation of PMI, concluded that the company could not adhere to global human rights norms while still selling tobacco products. DIHR ended their relationship with PMI.

Philip Morris, PMI’s parent company, promised for decades to stop selling cigarettes if they were found to harm health. On November 30, 2016, Philip Morris International’s CEO Andre Calantzopoulos spoke with BBC Radio 4’s Today, acknowledging, “It’s, to me, very simple. We produce a product that causes disease.” BBC’s Dominic O’Connell pushed back saying, “If you were concerned about the consumer, you wouldn’t sell cigarettes.” Visitors to PMI’s website are greeted with the words, “Designing a Smoke-Free Future,” seemingly admitting that selling cigarettes is unethical and their desire to stop.

“If PMI thinks it should stop selling cigarettes, what are they waiting for? Clearly, when faced with the choice between personal profit and consumers’ deaths, they choose consumers’ deaths,” said Laura Graen, Senior Policy Advisor of Unfairtobacco. “This letter singles out PMI because of DIHR’s strong statement, but of course the message and logic applies to all tobacco companies.”

UNFAIRTOBACCO
Founded in 2004, Unfairtobacco exposes how tobacco industry harms farmers, consumers and the environment. The project’s work in the area of development politics was recognized by the World Health Organization with a WHO World No Tobacco Day Award 2017. unfairtobacco.org

ACTION ON SMOKING AND HEALTH
Founded in 1967, Action on Smoking and Health (ASH) is America’s oldest anti-tobacco organization, dedicated to a world with ZERO tobacco deaths. Because tobacco is the leading cause of preventable death worldwide, ASH supports bold solutions proportionate to the magnitude of the problem. www.ash.org

“If PMI thinks it should stop selling cigarettes, what are they waiting for? Clearly, when faced with the choice between personal profit and consumers’ deaths, they choose consumers’ deaths.” 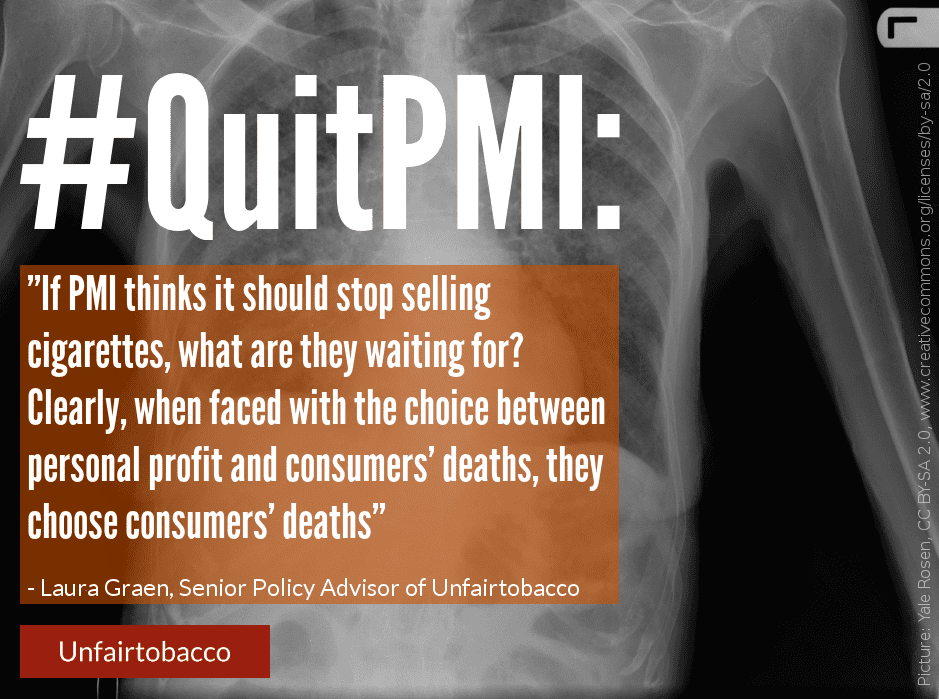 Action on Smoking and Health and Unfairtobacco agree with the Danish Institute of Human Rights (DIHR) that Philip Morris International (PMI) should cease “the production and marketing of tobacco.”