The problem: Tobacco growing is associated with child labour, health risks for farmers and deforestation, and it jeopardizes food security. The solution: alternative livelihoods like kenaf, parsley or soybean.

The preconditions for exiting tobacco cultivation are very different from country to country. Our case studies take a closer look at alternative livelihoods to tobacco growing in Malaysia, Malawi and Germany. Are they economically viable? Are they ecologically justifiable? Do they contribute to more social justice? In Malaysia and Germany, tobacco growing was not a main source of income for the ecomony as a whole. But for Malawi, tobacco is a major export crop. Smallholder farmers who are cultivating most of the world’s tobacco crop are struggling with the huge detriments of tobacco growing, but also with the insecurities linked to switching to other crops. Which different paths can lead to a tobacco-free agriculture?

We asked authors from the concerned countries to take a closer look and analyse the economic, ecological, and social aspects of transitioning from tobacco to alternative livelihoods.

To live up to their obligations deriving from the WHO Framework Convention on Tobacco Control (FCTC) and to cushion the consequences of the ASEAN free trade agreement, the Malaysian government promoted the cultivation of kenaf as an alternative to tobacco growing since 2005. Kenaf is a versatile plant whose fibers are used to produce, for example, car door trimmings, bioplastics, fibreboards or furniture.

After the end of EU subsidies for tobacco growing in 2010, tobacco farmers and tobacco processing companies in Germany had to look for alternatives to the tobacco business. In the Palatinate, a traditional tobacco growing area in southwestern Germany, farmers switched from tobacco to herbs.

Malawi is the world’s most tobacco-dependent economy. The government has realized, that switching to other crops is essential for the country, and supports amongst others the cultivation of legumes. The German Development Agency GIZ promotes the transition to soybeans, groundnuts, sunflower and cassava.

Case study on legumes and sunflower in Malawi [pdf]

Take a look at our map of alternatives for examples from all over the world.

Kenaf for car door trimmings and furniture, herbs for salad and pizza, soybeans for school meals and poultry farming. 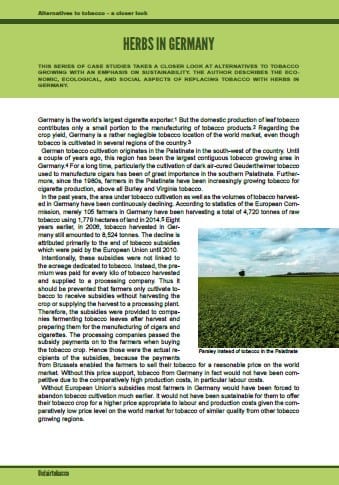 From tobacco to organic food, farmers in Zimbabwe changed their livelihood.

Apiculture as an alternative source of income in the Philippines

Annual income up to 110% higher compared to tobacco farming

Case study on kenaf cultivation as alternative to tobacco in Malaysia

Case study on herbs as alternative to tobacco in Germany

There are alternative livelihoods to tobacco. We present examples from Brazil, Kenya, and Bangladesh.